While the majority of Lankvillians spent this past Halloween walking around aimlessly, looking for a “good time,” visual artist and occasional occultist, Carl Dunn, spent his morning a little bit differently. Going to the local slaughterhouse, nearby his beloved Fotomat and down around the corner from the Pizza-A-Round, Dunn brought with him a pocket knife, a rare, leather-bound book of demonic chants, and attempted to contact the very face of evil Itself.

Because it’s the New Year, a time teeming with glee, ghosts and alcoholism, I probed Dunn for any tips he had on summoning spirits. He reluctantly obliged.

SS: Why are you doing this?

Dunn, standing in front of a wall.

SS: Fair enough. So what happened out there, were you able to bring forth the face of Evil?

CD: Oh yeah, for sure. It wasn’t really talkative though – I should’ve had a plan B. Maybe some notecards so we could engage in small talk or something. I was all prepared for the beginning, ya know, getting ‘im there – I chanted until my tongue was twisted…

SS (nods): The creepy book in Latin, the pocket knife to draw your own blood as an offering…

CD: Yeah, it was great. But then, It like, showed up in this big cloud of fog…just this floating head, really surreal. It had these bright, glowing red eyes and it let out this deafening shriek. If I were a weaker man, I’d have run for the hills, ya know if they weren’t polluted with toxic sludge…

CD: But anyway, It lets out this shriek for about ten minutes and then it just stops, blinks Its eyes and then looks at me. You could practically see the question mark hovering on Its face. 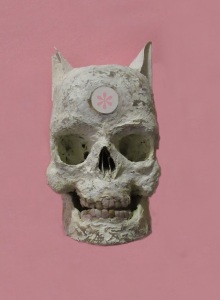 The Face of Evil (file photo)

SS: It wanted to know what you wanted, why you had summoned It…?

CD: Yeah, I think so. But I really had no good answer so I just said, ‘Hey, what’s going on?’ Then it disappeared.

SS: Amazing. Do you have any tips for Lankvillians regarding contacting spirits, the other side, ghosts, and any other odd undead land mammals?

CD: Notecards or a prepared speech, anything topical. I have a feeling that Evil is really interested in politics. Yeah, I’m gonna stick with that. You don’t wanna bore Evil when it finally graces you with Its presence.

SS: Thank you, Carl. As always, you’re a special delight.

Carl then nodded, gave me a pat on the shoulder and went out for a smoke. I preceded to put up special New Year’s tinsel and fuzzy garland, just to make the place look a little more festive. Happy New Year, Lankville!